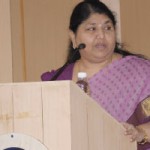 Instrumental in acquiring ONE CENT of Land free from Government of Tamilnadu for 20 Transgender at Villupuram.

Contributions to Children affected with AIDS

This entry was posted in Profile. Bookmark the permalink.